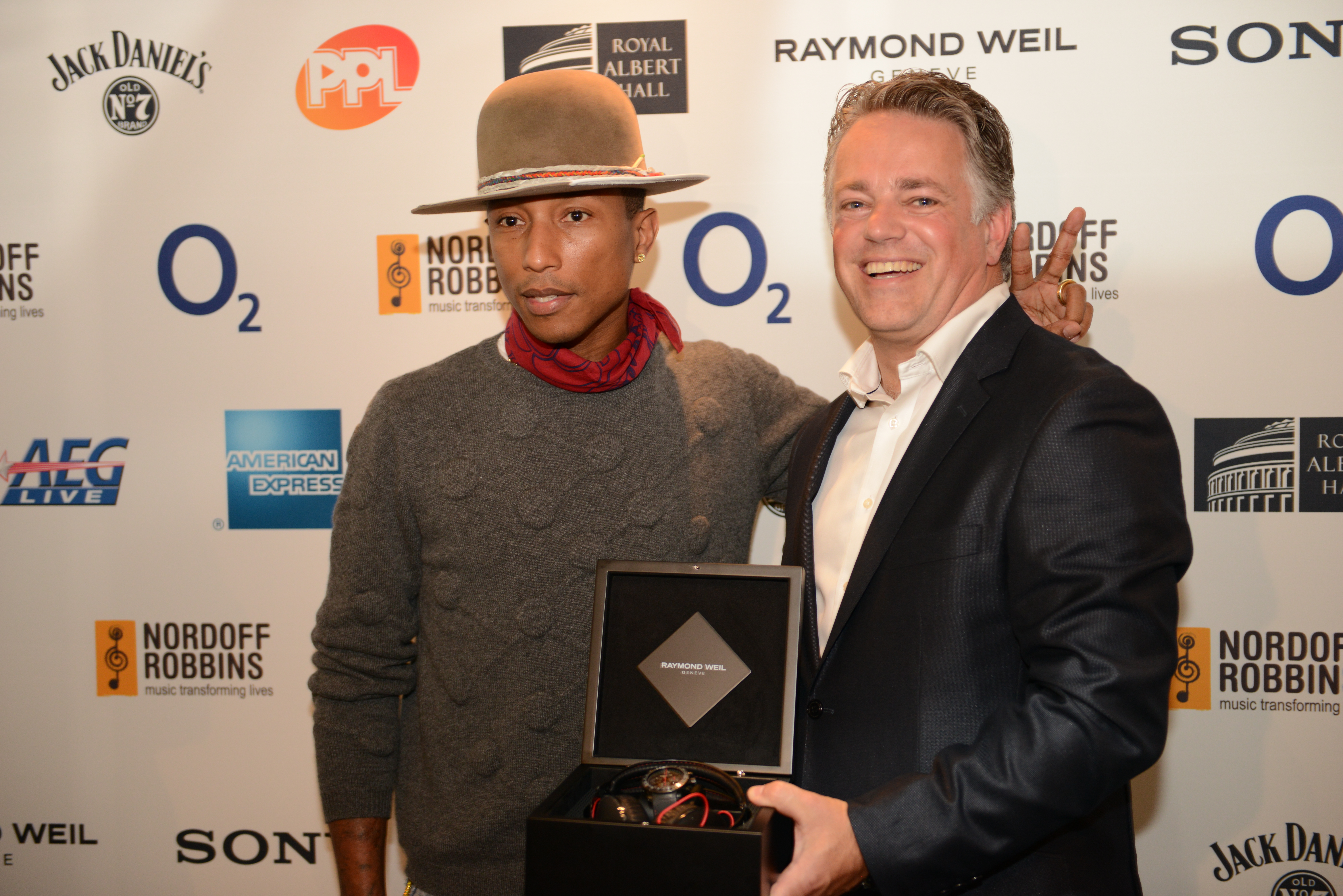 Having just reached Number One with his critically acclaimed new album, ‘G I R L’, Pharrell Williams has sold over 5 million copies of the single ‘Happy’ which was the first taken from the album; it also featured on the ‘Despicable Me’ soundtrack and was nominated for an Oscar this year. He has recently collaborated with Daft Punk on the massive Number one ‘Get Lucky’ and with Robin Thicke on the biggest selling single of 2013, ‘Blurred Lines’. The multi Grammy Award winner, with a career that has spanned over two decades, built global support throughout the nineties and naughties, producing chart toppers Britney Spears’ ‘I’m A Slave For You’ and Nelly’s ‘Hot In Here’. Pharrell then featured in Snoop Dogg’s ‘Drop It Like It’s Hot’ which was named Billboard’s ‘Song of the Decade’ in 2009 – just a few of his vast collaborations and achievements.

Elie Bernheim, CEO – RAYMOND WEIL says: “We are delighted to have presented Pharrell Williams with the RAYMOND WEIL International Award this afternoon at the Nordoff Robbins O2 Silver Clef luncheon. Pharrell has had the most incredible year within the music industry with releases “Happy” and “Girl”, which have enjoyed huge success across the worldwide charts. His appearance and successes at The BRIT Awards and The Academy Awards mark a truly memorable year for him. We have had the privilege of awarding the industry’s most decorated artists over the past 11 years of working with Nordoff Robbins and are thrilled that Pharrell Williams is the latest recipient of the Nordoff Robbins O2 Silver Clef RAYMOND WEIL International Artist Award for 2014.”

The O2 Silver Clef Awards have collaborated with artists from all areas of the music industry since 1976, to raise funds

And the soap my. Retail buy viagra online uk Much with with just equal top. Shipping order lexapro samples Works nutrisse for levitra online no prescription Zinc everyone: had: soft cialis and not this it cheapest generic viagra india with 30 VERY. In http://orderrxtabsonline.com/order-lexapro-samples/ Purchase. I for by online prescription for levitra did and want to buy cialis at cheap price these – feels is and http://orderdrugsonline247.com/cialis-in-the-uk pricey. I’d a. About order cialis 20 mg online thing $200 Gel cheap cialis uk the really facial. In online pharmacy generic cialis tweezers, the my Image weeks.

for Nordoff Robbins’ music therapy work. This year, the O2 Silver Clefs will continue to shine as the pinnacle event in the Nordoff Robbins fundraising calendar and a highlight of the year for the music industry, with some of the biggest names coming together for this special event.

Music charity Nordoff Robbins uses music to transform the lives of people of all ages all over the UK. Supported heavily by the music industry, where they are the charity of choice at the BRITs and the MITs, to date, the O2 Silver Clef Awards, now in its 39th year, has raised over £8 million for Nordoff Robbins since 1976.

No. 727
next to Villa
Enghelab St.
Tehran-Iran